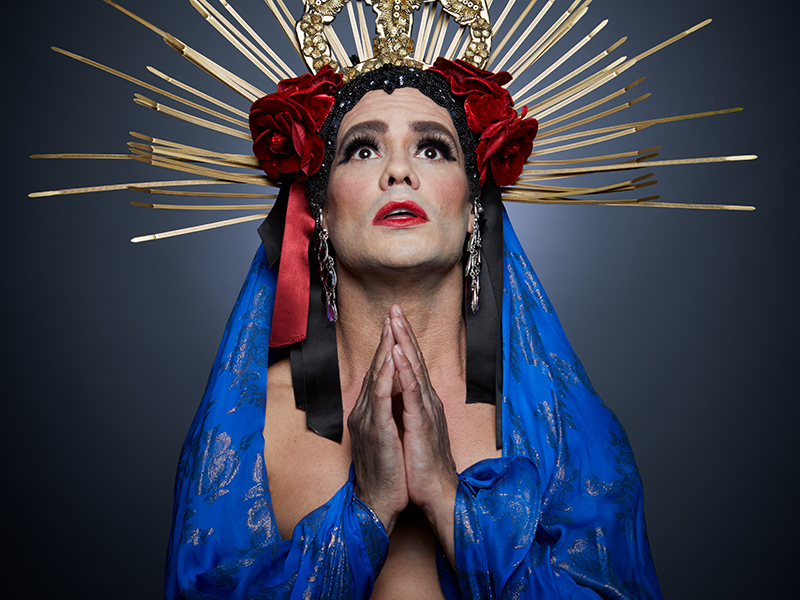 Like his namesake, Migguel Anggelo reminds us that he is, quintessentially, a renaissance man. His work is brought to life through an insatiable appetite to create without bounds, express poetically, provoke deeper thought, and to achieve the art of surprise.

Anggelo invokes muses from art history as he charts his evolving journey as a Latino immigrant and a queer man. He expresses himself through elaborate costume, musical composition, and monologue, evoking the “showmanship of Desi Arnaz and the performance art of Klaus Nomi” (Theater Scene). His influences and stylistic ambitions range from mime icon Marcel Marceau and silent-film comedian Charlie Chaplin to pop stars David Bowie and Freddy Mercury.

LatinXoxo is an outrageously queer and gender-bending concert experience. Anggelo peels onion layers of personas, putting on and stripping off “Latin lover” clichés as he reckons with the tragic death of his homophobic and disapproving father. As BroadwayWorld noted at a recent performance of LatinXoxo at Joe’s Pub, “a Migguel Anggelo performance is guaranteed to entertain and enthrall."

In light of the circumstances involving the COVID-19 virus, this performance has been canceled.
Add to Calendar 04/23/2020 7:30 pm 04/23/2020 7:30 pm America/New_York Migguel Anggelo: LatinXoxo David Rubenstein Atrium at Lincoln Center - Venezuelan-born, Brooklyn-based Migguel Anggelo is an interdisciplinary performing artist who, like his namesake Michelangelo, explores and deconstructs the figure and idea of “man.”... David Rubenstein Atrium, 61 West 62 Street, New York, NY 10023 Lincoln Center - David Rubenstein Atrium at Lincoln Center false MM/DD/YYYY aho3e0k00zv7rk56sm4e178
Share
Presented in collaboration with the New York Presenter Consortium—a network of presenters dedicated to supporting artists and the City’s creative ecosystem.
With musical direction by Jaime Lozano and a book by J. Julian Christopher, LatinXoxo is conceived by Migguel Anggelo and directed and developed by Srđa Vasiljević.