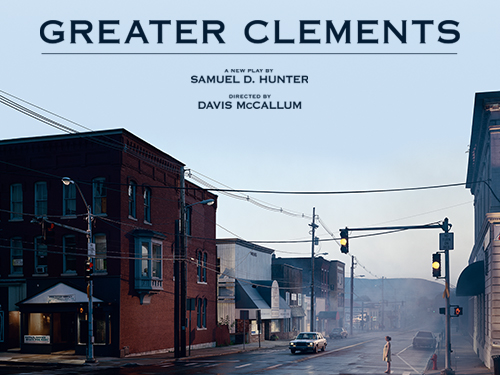 Lincoln Center Theater is very excited to work with Sam Hunter again, and to produce GREATER CLEMENTS for the start of LCT’s 35th season. Sam is a young, distinctly American playwright and a fine writer with a wonderful ear – a poet of the American loner, imagining characters whose lives are outside the mainstream. Among his recent works are The Whale, which won a Drama Desk Award and the Lucille Lortel Award for Outstanding Play in 2013, A Bright New Boise, Pocatello, The Healing, and last season’s acclaimed Lewiston/Clarkston.

His new play, GREATER CLEMENTS, takes place in the fictional town of Greater Clements, Idaho, a mining community where properties are being purchased by wealthy out-of-state people, forcing out lifelong residents — largely blue-collar workers — who are becoming disenfranchised and disenchanted. The story is told through Maggie, played by the marvelous Judith Ivey. Maggie is on the verge of shutting down her family’s Mine Tour and Museum business. Her troubled adult son, has moved back home, recovering but unmoored. As the play opens, Maggie awaits a visit from an old friend. He brings a tempting offer to start a new life with him beyond this desolate town’s limits. Through the author’s humor, keen observation and deep sensitivity to these lonely characters, we see just how hard it might be to leave the past behind.